Wall Drug: they had a piano I didn’t play it

It wasn’t until I spotted a sign on Interstate 90 saying “Wall Drug, 782 miles” somewhere in Wisconsin that I understood the signs I saw for years on the London Underground trains – “Visit Wall Drug”.

As I wondered what the sign was saying, (having never encountered a speaking sign before) I came across another sign “Wall Drug 769 miles”. Approximately 250 signs later, I rode my motorcycle into Wall and decided to visit the Drug Store, home of the Jackalope. It is the second most exciting thing in South Dakota, which isn’t saying much.

There was a piano in there somewhere, which I decided not to play. Rashly we ordered coffee and burgers. The American suicide kit – you drink coffee so bad you want to die, and if you keep eating American burgers, that will do the trick. 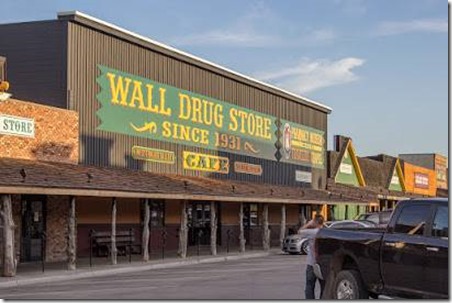 Those of you who have never travelled I90W, or I90E for that matter- a stop at Wall Drug is highly recommended. Just be careful about the oncoming traffic.

Esmeralda had changed her mind. “Let’s go to Amsterdam.” she said. We were in Dublin at the time, and the map clearly showed several blue bits in between. Ferries. Once we got to Amsterdam, we stayed in the hotel where Chet Baker died, had some ordinary coffee and remarkable cigarettes at a cafe by the canal, and then left the next morning. Esmeralda had changed her mind again. “Lets go to Southampton”

Holland, Belgium, Northern France, then the Chunnel (not recommended on a motorcycle as you stand up the whole way.) Riding back through Kent we went past the Ocean Inn, Dymchurch. I remarked to Esmeralda that this was the pub where I played my first ever paying gig (10s for an hour in 1965) and my second paying gig (£1 an hour a day later). Shall we have a look? “Keep going” she said, so I did..

The Ocean Inn: it is a bit blurry – could be the beer…

Next week: Some Festival dates for you to consider. They all say they are happening…
TW