…And we are rapidly approaching a point where we will run the risk of being over-subscribed. This last week, we had 4 pianists, 4 saxophonists, 6 drummers, 4 bass players, 2 guitarists, and 9 singers – a total of 29 musos for the Captain to fit in. We barely managed, so if you are one of the lucky ones who got to play more than three times, make sure that everyone else gets a go before you get up again.

Trevor Prasad,(keyboard) for one. He contented himself with the thought that the piano was inaudible, but what we could hear of it was pretty much on the money.

Bill Swannie: (drums) first time at the Post, Bill has played a number of gigs with Katerina in the past and remains as smooth as. And it is his Birthday.

John Perri: maintains he has barely touched the drums for months, but is a dream to play with. Possibly the only drummer to suggest 12/8 time and mean it. 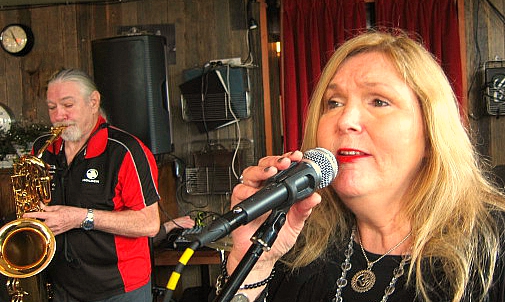 Jane: sang early: and entertained. Stayed late and should have sung again. Jeff Harris in the background.

Summary: The Captain resorted to putting up six or seven musos at a time as a means of getting everyone in. The Captain Chaos Knackeredom Index was up several points by the time we finished and packed up. This was a busy session, and ran well late. There was lots of good stuff going on. Word from the audience was generally highly complementary. Hortense and Madge from Altona were both speechless, but only because they were not there. Again!

Did you notice the Sandwich Board outside, and the update on the Post Hotel website? Have you seen the ads on Melband? Have you given one of the MJJ cards to your best friend, vague acquaintance or complete bluddy stranger? Have you tried googling Melbourne+ Jazz+ Jam Session, and marvelled at how high up the first page we come?

The Post Hotel, corner of St Kilda Road and Inkerman, next Sunday 6th October, 4.00pm start. Should be fun – get there early and help move the PA around (again!); order something exotic off the menu, get your instrument out and start playing it loudly whilst we are doing a soundcheck – God, we love that!

This Sunday 6th October, usual time, the Bar is right opposite the Railway Station. Vice versa is also true. John Hannah reports that Mauro has invested in a new sound system. Nick it and bring it back…