Peter first started coming to the Jam Sessions way back when, at the Royal Standard and the Leinster Arms. He was an occasional visitor rather than a regular. I did not know him outside the sphere of his musical activities. We recorded in 2011 with Julie Stewart and Brae Grimes at the ABC Studios, and we saw him play with Breakout in 2016 at the Castlemaine Jazz Festival. As ever, Peter put on a bit of a show.

He had a strut and a swagger when playing, which he would then ruin by grinning impishly to show he didn’t take himself too seriously – indeed, he had a dry and cynical sense of humour. The last time he played at a jam session it was obvious his time with Breakout, or his retirement from teaching, or both, had enabled him to develop his guitar playing to a considerable degree.

After a short illness, Peter died last Wednesday, with his family at his bedside. He will be missed by the Jammers. We rather liked him. I think most people did. 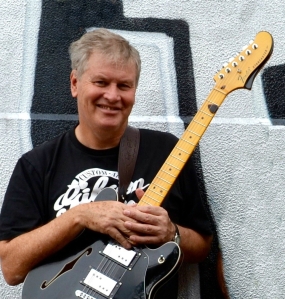