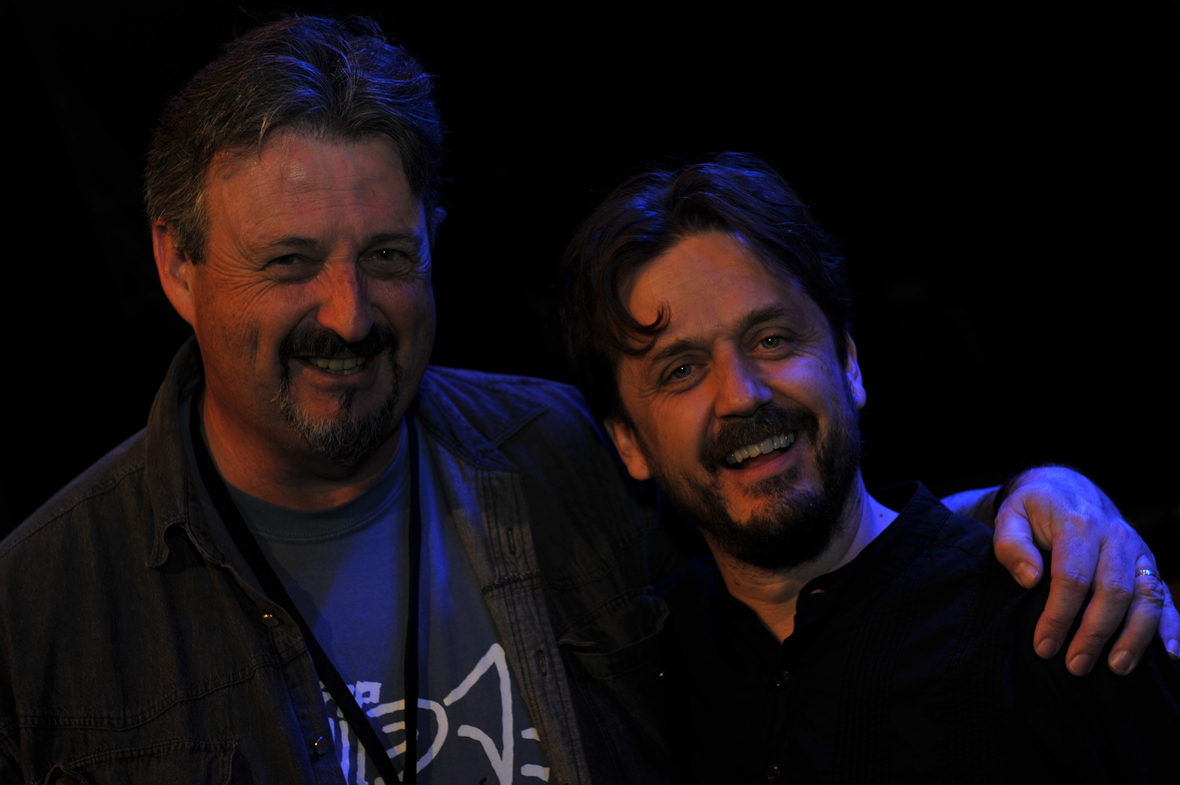 Adrian Jackson (left) with Barney McAll at Wangarratta in 2013

Meanwhile, after 27 years as founding Artistic Director at Wangaratta (as well as the Melbourne and Stonnington jazz festivals), Adrian Jackson is currently unemployed, and in need of some non-major medical assistance. Knowing the ‘inside’ story, I can confidently state that both the Wangaratta and Melbourne festivals could have easily “fallen over” in early years of financial strain if Adrian had not gone way beyond the A.D. role, and worked on management and budget aspects (as well as taking effective pay cuts). He has also ‘backed’ the Australian creative music scene when this music does not always deliver audience numbers (I recall seeing ‘Band of Five Names’, with Phil Slater, playing to a modest audience at Chapel-off-Chapel as part of Stonnington Jazz almost a decade ago, but support like that often ‘bears fruit’ later, like Slater’s suite at Wangaratta).
But it is easier to program the popular choices than the less-adventurous. This artistic courage is one of the reasons that musicians respect Adrian, and are readily supporting his Benefit.
– Martin Jackson

Adrian Jackson had this to say about his Benefit:
“OK, I should say something about this. It is in some ways embarrassing to be seeking financial assistance as a 60yo. Although my situation, in part, reflects the downside of a career in arts administration, and jazz administration in particular. You don’t get paid holidays or sick leave, long-service leave or employer super contributions, unless you pay for them yourself.

The last two years have been very difficult for me. Divorce after 31 years of marriage. The innings was declared when I was on 27 at Wangaratta Jazz. A perfect storm of ambitious investment strategy, inadequate support from the company I was investing through, and well-intentioned but disastrous advice to my wife that share trades should cease while we discussed divorce terms — just when the options we had bought/sold moved into a brief window of profitability — saw my life savings and super fund decimated.

I have had a series of health issues to deal with. And just as I let my car insurance lapse shortly before an accident where I was the at-fault driver, and was unable to renew it before the car was stolen and written off recently…..so it was that I couldn’t afford to maintain my private medical cover after 35-odd years, just a few months before learning that I need expensive surgery to remove polyps on my vocal cords, if I want to speak above a raspy whisper.

Now, I’m not here to say ‘poor me’. OK, I am. But I’m not saying my problems are all down to bad luck. I’ve done my share of dumb things of late, too. On the whole, I consider myself fortunate to have enjoyed a career in the music industry, presenting or promoting music that I love, mainly jazz and blues. And I hope that chapter isn’t finished yet, that there will be more to come, post-operation. (Albert Dadon has offered some welcome encouragement with regard to that).

I shudder to think how I might have survived the last two years without the support of my siblings. But they can only do so much. So when Martin told me he had discussed the idea of a benefit gig with a few musicians, and asked if this would make me feel embarrassed, I replied, “Only if nobody turns up.”

So I would like to thank my family for their support. To thank Michael Tortoni for providing the Jazz Lab for the event, at no cost. To thank all the musicians who have offered to perform, as well as those who would have if they could have, and a few who I suspect will be added to the roster between now and November 19. And the same goes for a blues-based benefit that I believe is being organised shortly after the Jazz Lab gig. The support, generosity and friendship of so many is deeply appreciated.

For anyone in two minds about attending, I can say two things. (a) check out the great array of talent on the bill, and (b) I won’t be in any condition to make a speech. – Adrian Jackson