Last Sunday was a blast, but I barely attended, so what would I know… Sadly, it had to finish early, so Il Duce could spend the evening thanking his staff, and possibly bribing them to stay for another year… but I had time to catch a coupla lively toons by Julie (“I’ve never tried this one”) Enright, equipment failure for Katerina, some fine playing from an ageing roue descendant of the knight errant Sir Roger De Coverley, mainly famous in his day for his way with a saxophone and his tight fitting armour; and a cameo from Don, accompanying Rose. The Bus Conductor, I am told, played bass all afternoon – onya Mr T!

On to less important matters: the Pre Christmas Jam Session Bash. ‘Tis the season to be jolly, apparently. Jammers in the know can escape the horror of all this, by spending a quiet afternoon at the Melbourne Jazz Jammers Annual Sorry Excuse for a pre-Christmas Bash.

This longstanding traditional get together will take place on Sunday 11th December.

We will be foregathering for a little light luncheon in the Atrium at 1.00pm, with music to start at 2.00pm. After that, you are on your own, but it is fairly safe to say that standards will slip alarmingly.

If you haven’t been to one of these before (and about 30% of the current crop of Jammers are in the first year of their musical downfall) then be advised that this is an outstandingly well organised event, up to about 2.03pm, after which, it will descend into a glorified Jam Session or light farce, whichever works best on the day. 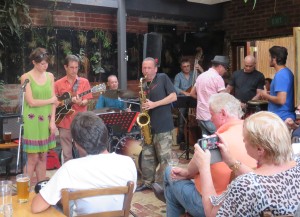 Happy snap from the 2015 Bash: the lads got carried

away and played some decent music that arvo…

In the finest traditions of the jam, Captain Chaos and the lads will keep playing until they run out of notes – and everyone is encouraged to join in. If you can’t avoid the blame, at least share it as widely as possible…

Book for lunch by turning up this week and seeing Glen, or if you want to be all posh, contact the Hotel on: