The development of jazz, from its earliest stages through to the demise of the postmodern CD cover is often described in four categories: Early Jazz, Swing, Be Bop and Post Bop. Not that the jammers had a great regard for that this week. Adopting their habitual fifth category, they systematically demolished almost every toon suggested by an increasingly demented Captain Chaos. 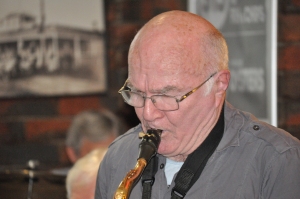 Pride of place must go to Messrs Curtis, Chaos, Peter the bass and Michael on drums, for a particularly fine effort in destroying Mr Mingus’ bebop Round Midnight. Who would have though it was possible to drop bars before you have even started?

There were, as ever, the occasional escapes from the gulag of mediocrity, perhaps best illustrated by Mr Laurie on sax, followed by Cardinal Calamatta, and Ivan and Doug on double basses. Michael played some neat drums, followed by Bill, even neater, Peter on electric bass drove things along nicely for a while, although having mastered the chart reading thing, he is now realising that nobody follows the chart anyway.

Newcomer Liam sang in whatever key the band felt like, and Kevin waltzed across a few good toons as well. Geoff, the aforementioned Curtis, Peter Garam and meself tickled the plastics, there being a shortage of ivory these days, and that, as the Vicar’s wife would say, was that. 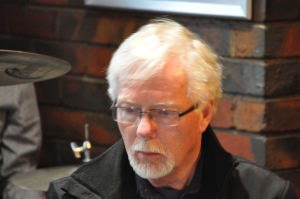 The aforementioned Curtis, seems like a a sensible chap, but has been turning up at jam sessions for years…

We all came away from that one thinking, maybe not the greatest Jam session we have ever had, and full of that blind optimism with which the Jammers have hoped for better things, for somewhere between 24 and 26 years…

The more things change, the more the French have a saying for it.

See ya this Sunday?