Good grief, whatever next…

Sunday at the Leinster saw the return after many months of the mercurial Julian Driscoll on Flugal Horn and the appearance of newcomers Casey (Trumpet) and Matt (Bass). Noel,, Tony and moi on Tenors. John, Don and Bob on the keyboard. Ben and Elliot guitars, Doug also on Bass and drums from Glen, Spike Bruce and Anne.  Vocals from Debbie Chris and Stewart. Overall some very fine Jazz was performed

For those of you who either cannot sleep, play 3rd trombone in Rimsky Korsakov’s Piano Concerto in C#minor, or are remotely interested in the future of the music “business”, here is an extremely well researched article worth a read…thought provoking stuff on the changes in CD sales, streaming music services, concert revenues and the like.

Compare this article by Roger McGuinn ex of the Byrds and his recording career from the 60’s to 2000 with the article above. Has the music business changed, make up your own mind.

Friday night, the impeccable Miss Katerina Myskova, with meself, Doug “haircut” Kuhn and, if he answers the phone in time, Captain Chaos himself. Miss K wowed ém at Dizzy’s last Friday and has condescended to slum it with us mere mortals once more – actually, she jumped at the chance.

Last Friday, Jen Salisbury hopped in as the booked singer called in sick, and despite Grumpy Boris’ initial reservations put in 2 hours of up tempo jazz, swing and blues, without batting an eyelid. Marvellous attitude, great singing and came up smiling. The goods! Boris was so impressed he ungrumped himself and asked for her again. Stay tuned…

Props to the Captain who sat in for a coupla numbers, but stayed and played all night, at tempos that would make a maiden blush; and to “Twang” Stewart on guitar for some great solos. 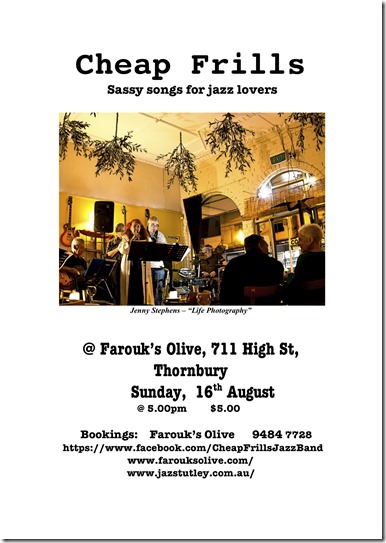 We all know that jazz in Australia is alive and well! Great musos all over the country, lots of talented youngsters graduating from colleges and universities every year, clubs, pubs, festivals…

But what about our jazz history? The great post-war jazz blooming of the Bells, Graeme and Roger, Ade, Graeme Coyle, Bob Barnard, and more. Some of the great gigs of all time were recorded on tape and acetate, and you know what happens to them over time: they disintegrate. END_OF_DOCUMENT_TOKEN_TO_BE_REPLACED

Hi
Thought people might like to know Bob’s next Join A Vocal Class is starting August 15th . Couple of spots still available. They can contact me at raeseds@ozemail.com.au or 0403302324 for more information.
Thanks
Rae S

A wet and cold Sunday afternoon kicked off with new comer Femin Navasques on Guitar, Andy Moon on Bass, Glen on Drums and your correspondent on Tenor Sax. Soon joined by John Curtis on Keys, Tony on Tenor with Kaye Young and Kevin Rolfs on vocals. Stayed that way for quiet a while until John was replaced by Sam who in turn was replaced by Sharon who also sang. Mike Hirsh took over from Glen.and Chico (guitar) and Conrad (Bass Guitar) arrived and introduced us to another vocalist …Winsome. Young Kelvin and Sebastian saw out the evening on drums. John played some nice solo keys when we finally packed up.
Best items (in my opinion) were Winsome singing “Feel Like Making Love” and Tony playing “As in a Morning Sunrise”. Obliquity train wreck was  Miles Davis’s “Walking” played by Tony and me.

At the time of writing, there has been  little movement at the station, and not a lot of words going round, for quite a while. Miss Madge of Altona,(you should be so lucky)  has elected to take her annual mid winter break in Charters Towers, there being no airline sufficiently equipped to take her further than that. It is to be hoped she will return suitably refreshed, but livid with regard to the Duty Free situation, which will not be operating in her favour.

It is some time since Madge attended a Gold Street Gossip Shop soiree.  Which probably explains why they have been going so well of late.

Of Hortense, the less said the better She, too, has been away, and I understand the Altona West Litter Bin Renewal Project has been coming along in leaps and bounds, whilst the more buffed members of the Refinery Fire Brigade have taken to polishing their splendid red pumping unit, there being no cause for call out since.

Best turn up next Sunday, whilst the going is good!

A surprisingly louche little jam session this one. I say surprisingly because I have no idea what louche means.

It was good to catch up with Colonel T of the Fourth Light Punjab Horse, back from the mountains of Spain, and to listen to the delicate strains of the Lunatic Soup Lounge Pit Orchestra and Choral Ensemble as they wafted their way through a variety of mid twentieth century disasters, rendered barely unrecognisable by the occasional foray into the sequence of notes that their composers had intended.

Captain Chaos marshalled the troops, sent them up several wrong turns and came out smiling. Grant (saxaphobe) rather wiped the floor. The Divine Miss Smith was in fine form (Grade 4, where she spent the best three years of her life). A succession of rock drummers, Il Duce, Bruce and Spike took turns in subverting the paradigm, Chrissy Manetta sang, the Keef was there, Sam Izzo, Gentleman John Curtis and Don played piano, Ben Stewart guitared I think, Doug Haircut Kuhn carried the bass a la stick for much of the arvo, and a whole bunch of others joined in from time to time.

All in front of an audience that was the most part, sensibly sticking to the chips, and alternately lightly bemused and lightly medicated.

See ya next week?
TW

Will be held at 3.00pm on Sunday 9th August. Should you wish to attend, wish to register as a Member of the Association, or wish to put your hand up as a Volunteer for the 2016 Festival, you would be most welcome…

The Castlemaine Jazz Festival annual general meeting will be held on Sunday 9 August at 3pm.

The venue is the Cumberland Hotel, cnr Barker and Lyttleton Streets.

One of the agenda items will be the election of an organising committee for the 2016 CJF.

Anyone with an interest in jazz is welcome to attend — and perhaps become a member of the CJF. There’s no membership fee and no obligation to take on any roles. However, those who would like to volunteer will be most welcome.

* For those who did volunteer at this year’s hugely successful event, a ‘thank you’ gathering will be held in the Cumberland at 1pm on the same day. Drinks and snacks provided.

The Laika Bar sessions are currently running on Fridays only. Apologies to the singers and musos already booked as we are re-working the Schedule. This week, Adagia will be singing a variety of jazz toons, with her unique improvisational skills . If you haven’t heard her, get on down – she packed the joint two weeks a ago and another hair raising night (for the CCQ anyway) is in prospect.