Just spreading the news about this gig.
Contemporary & Latin jazz. Come down and join us in an interesting and colourful musical contrast of these eclectic trio. The perfect music for a winter night in Melbourne: Adam Rudegeair keyboard, Mike Matthews bass and Gustavo Moreno on drums.

Did you know we have a Melbourne Jazz Jammers Facebook page? Join now at https://www.facebook.com/groups/83551088146/

There you can interact with other Jammers. post or download Jammers pics and view lots from the Castlemaine Jazz Festival and from the archives.

My name is Adrian and I play Tuba. I’m relatively new here in Melbourne and am looking to do some playing if possible. I’ve been playing tuba for sometime and have played with Nick Polities from Louisiana Shakers,
http://youtu.be/45mN1o7rVY8
Bruny Island New Orleans Jazz Band, Derek Dalton Adelaide, Clem Meehan from Dixieland Express and Tania Bosak from Rektango to name a few.
I grew up in Hobart and have more recently moved from Adelaide to Melbourne. I’d be keen to listen to some great Jazz and hopefully do some playing as well sometime in the future.
Cheers, Adrian
Preview YouTube video The Louisiana Shakers – Sunday at Carlton’s Clyde Hotel 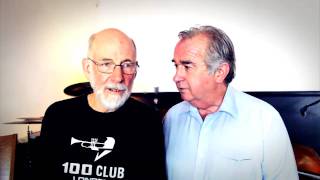 Nothing got broken, nobody died… read on

Done and dusted, the Second Castlemaine Jazz Festival, a whole lot bigger than the first, went off without a hitch. Despite the weather being colder than a mother-in-law’s kiss, it stayed dry. Amazing how many people came up to say they were having a lot of fun. That was the idea, actually.

Standout bands, for mine anyway, were Glass Moon, Blow Out Big Band, John Macgill’s Undectet and anything with Ade Ish, Chelsea Allen or preferably both in it. And the incomparable Nicole Thorne

The Venues: Castlemaine Old Gaol was a sensational venue. The New Northern went all out and nearly ran out of food (I saw the manager running to the corner store on the Sunday…), Five Flags manager Mick had a grin a mile wide, Run Rabbit Run sold out and stayed shut on Monday they were so knackered, The Bridge Hotel ran out of beer, the Food Garden surprised by having the best acoustics of any venue, and Mark Anstey;’s ludicorusly eccentric Lot 19 saw some great performances – Ruby Rogers with Avi Ganesan playing out of his skin, BLT’s providing a great wrap up session on the Sunday.

The Jazz Train was a huge hit with the audiences, but the muso’s found it difficult to play when the train swayed from side to side. Not drinking enough, probably.

Bob Sedergreen’s Masterclasses were probably the highlight of the Festival – both sessions well attended – and his exploration of the different jazz styles was nothing short of brilliant.

The Volunteers were fantastic, the Box Office ran like clockwork (props to OberGruppenFeuhrer Mary Dunne for that one): and Doug Kuhn and the Captain worked long and hard to wrangle equipment, musicians and still find time to play some great sets.

And will we do it again next year?
TW

All quiet on the western front…

…On account of we will all be going to Castlemaine Jazz Festival (Mark 2) this weekend.

Had a call from Glen (Il Duce to those in the know) this week. Apparently the Leinster Arms is not closing down, and he has to keep working until the fines are paid off. Which could take years, hopefully.

Some other things you may not have heard about Glen

He does not own shares in a hairbrush manufacturing company. We can’t imagine why.

Drummer extraordinary… Glen maintains he has played drums with some of the finest rock and roll groups in the country in his youth. Which we are inclined to doubt, as

(a) He doesn’t own a karaoke machine

(b) In his youth? Was rock and roll invented then?

Glen’s first session with the Jazz Jammers was on an electronic drum kit. He may have forgotten this, but we have not.

The Leinster Arms has won a lot of Awards, as one of Melbourne’s finest watering holes. But not since 2010

If you do turn up at the Leinster Arms in a fit of absent mindedness (and let’s face it, that covers most of us), there may be live music this Sunday.
TW

We are taking a break from the Laika this week, again because of the Castlemaine Jazz Festival. Last week saw the biggest two nights yet, with Risa Khodani on Friday night, and Cathy Macquade every bit as sensational on Saturday.

The Captain Chaos Quartet (with a name like that we could be anywhere between three and five piece) returns on Friday 12th June, with the immaculate Sevil Sabah, and Jennifer Salisbury rowdies up a Saturday night on 13th June

Did we mention the Festival? Oh, we did. YOu can get a weekend pass for $80, or rock up on either Saturday or Sunday for a mere $55 for the day. Which ands at Gods knows when with a riot at the CUmberland. Otherwise know as a Jam Session.

Go on, you know you want to…

castlemainejazzfestival.com.au or tickets will be exchanged for filthy lucre at the Box Office